I hope you’re all getting in that Christmas Spirit and serving those around you! I’m so grateful to be able to share the true reason for Christmas with the people of Taiwan. Christ truly is the greatest gift we’ve ever been given!

This week in Taiwan was amazing! I’m pretty sure I say every week is amazing. But it’s true! I’ve been here in Taiwan for a month and it gets better every single day!

Here’s a few amazing things that happened this week:

I went on exchanges with my Sister Training Leader, Sister Phillips! It was so fun! On this exchange I had a taro root baozi, which is my new favorite food Haha so good! We also went and helped a member sweep and mop her stairs. After we finished cleaning the member had us meet with one of her friends. We sat down with her on the stairs to start teaching and she had absolutely no interest. So we asked if we could simply show her a one minute video. It was the Light the World video (the Asian side of the world actually has a special campaign different from the rest of the world) But it was cool to see her countenance change as we played the video about Christ. She then listened with full intent to our message and set up to meet again to learn more. Christ truly does change people and change lives in the best way possible.

One night this week we were headed from Zhubei back to Xinzhu for a lesson. This bike ride is typically an hour and 20 minutes. Problem is, we had 45 minutes before we had to be at our lesson. So we bike sprinted for 45 minutes, managed to hit every light green, and right as we were pulling into the church parking lot for our lesson with 20 seconds to spare, our person cancelled. So we said a prayer asking Heavenly Father what he wanted us to do. My companion and I both got an impression to go visit a lady named Daisy. Now Daisy is a former person we were teaching who just stopped answering all of our calls. We went to the place she works. She hates her job, but she says it’s what she’s got. When we got to her work, she started crying. In the Chinese that I did understand, she said that she had been waiting for us. She was ready to try again, but she didn’t know if we loved her enough to take her back. Now, I’d only ever met her twice before, but I could feel Christ’s love for her that night as I testified that God is always reaching out for us, waiting to take us back when we want to try again. This experience was incredible.

Other good things that happened this week:

We met an adorable 9 year old whose mom is a less active member [of the Church]. She’s got a fiery personality and a lot of sass, but she told us that she wants to start coming to church with us, so we’re super excited about that!

We as Sister Missionaries – there were 6 of us – were asked to participate in the Young Women in Excellence program where the young women showed off what they worked on this year. We did a hilarious skits about Personal Progress, becoming like Christ, and missionary work, that they all loved! 🙂

We also did a service project with our ward for the day of service where we cleaned up around our church building. It was lots of fun and feels so good to serve all those around us.

1. We were at the church with our Zone Leaders after a meeting and found the biggest spider in the world (that I’ve ever seen) inside the building. It was the size of both of my hands set side by side. So the Elders started by throwing paper at it to get it to move so they could trap it and set it free outside. Then when that wasn’t working, they decided to try and spear it with an umbrella. That didn’t work either hahahaha. So they legit made a maze out hymn books and umbrellas to try and coax the spider outside. That obviously didn’t work. Finally they resorted to throwing a book at it which caused the spider to start running and the Elders to start screaming! So I threw a box over it, and then we dragged the box outside. When it was outside we lifted up the box and it went running away. It was scary but hilarious!

2. When we went to visit our cute 9 year old that I mentioned earlier, she taught us a new word. It means wet rat or chicken. She says that’s what people look like when the ride scooters in the rain. So now whenever it rains, we just laugh and think of her as we are getting wet on our bikes.

3. On exchanges, we tried to go visit our bishop. Fun fact though is that it was supposed to be a surprise visit because we were gonna “heart attack their door!” But he lives in a fortress. So we slipped through the front gate of the apartment complex when someone else was walking through. However, when we finished we realized we were locked in because we needed a key to exit the front gate. Hahaha we had to call our bishop and ask him to come let us out…surprise ruined hahaha but it made for some great laughs!

4. We accidentally biked through a firework show. I don’t really know what to say about it aside from I was laughing so hard and terrified for my life at the same time.

Anyways, that’s about it from me! I hope you all have an amazing week! 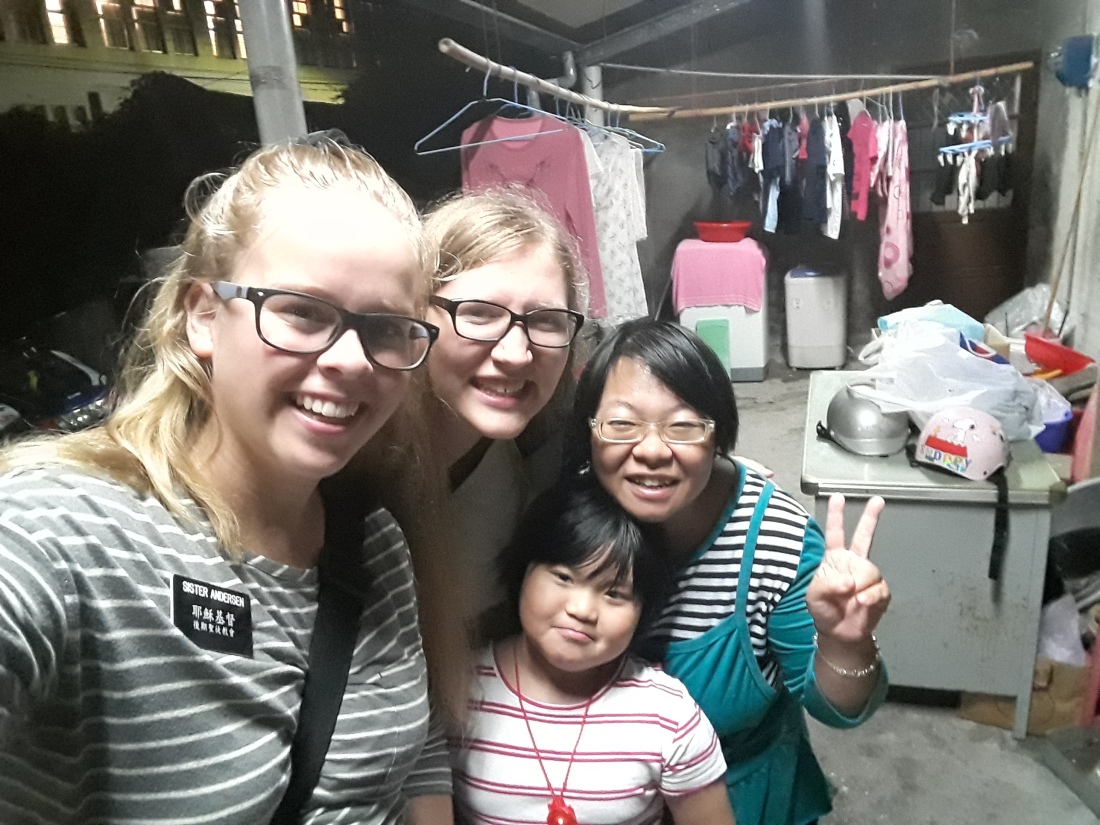