Skip to content
koreakonnor Testimony October 1, 2018October 7, 2018 5 Minutes
“OHHHHHH WE’RE HALFWAY THERRRREEEEE OHHHHHHHHHHHH LIVIN’ ON A PRAYERRRR!!!” 🎶
Actually though, living on all sorts of prayers. That and I have made it to my halfway through the MTC mark as of Saturday. That sounds absolutely crazy to say because I don’t understand how fast that month has flown by…but I also don’t understand how it feels like I’ve been here for so long. Time is strange. But I LOVE the MTC!!
This week has been one spiritual experience after the other, and I don’t really know how to explain it in any other way besides sharing the best spiritual experience from a few of the days…so….dui bu qi bu dui bu qi (sorry not sorry)
Monday:
One of our teachers shared the Christmas (yes Christmas…we won’t be celebrating in Taiwan, so we’re celebrating three months early) Story of these 3 trees. So they are all standing in a forest and talking about what they want to be when they grow up. The first says he wants to be cut down and be a bed for a baby. The second says he wants to be cut down to become a magnificent ship. The third says he wants to stay growing tall so that he can always point upwards towards God. When the time comes, the first one gets cut down and made into a food trough for a stable. The second gets cut down and made into a fishers boat. And the third gets cut down. All of them stop and say, “Why did you let this happen to me God, this is not what I wanted.” But God answers them and tells them to be patient and wait and see. The first one that was made into a food trough ended up being the bed that Christ was laid into as a baby in a manger. The second one that was made into a fishers boat was the same boat that was carrying Peter, when Christ told him that he could walk on the water. The third became the cross that Christ was crucified on. So he became the symbol of Christ, and whenever anybody saw a cross, they would be pointed towards God. Wow what a testimony of having patience in the Lord’s timing. Seemed to be a common theme this week.
Tuesday:
We had a workshop that addressed how to be an effective missionary. One of my favorite parts was when they had balloons that we’re blown up with helium. These were our positive thoughts and attitude and excitement towards our mission. But then, someone told you something negative about your mission and popped one of your balloons. So now you only had one left. And then you started to doubt your ability to learn your mission language, so in effect, you popped your own balloon. What happens when you pop a balloon? You have to rely on Christ to quickly blow them back up and continue having a positive attitude, and believing that through Christ you can be strengthened and accomplish all things. 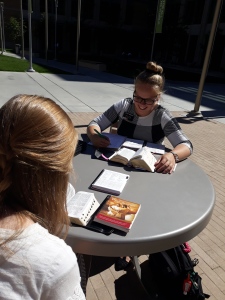 My personal study was absolutely fantastic!! I started the Book of Mormon again when I came to the MTC, and I was reading in Mosiah 14. Verse 5 says, “But he was wounded for our transgressions, he was bruised for our iniquities; the chastisement of our peace was upon him; and with his stripes we are healed.” I know that Christ suffered for all of us. He knows perfectly exactly what we are going through at all times. This verse came after a long time of searching for answers in prayer. But I know that we can always reach out to and rely on Christ. Through him we can find healing, peace, and comfort, and that is something I am so excited to go share with the people of Taiwan!

We saw Elder Jeffrey R. Holland (of the Quorum of Twelve Apostles). He poked his head into our classroom (I sit right by the door, so I was shocked when it opened and in popped his head) and just goes, “Is the church still true in here?” “Seems like it!” “Keep being great missionaries!!” Just a spiritual man, that’s why it got included in the spiritual experiences.

Sunday:
We had a devotional that talked all about the Apostle Peter. We also talked a lot about the story of Peter walking on the water. In a sense, all of us have been called to and told to “walk on the water”. So what is our water? For me right now, it’s learning how to convey how much the Gospel means to me in a foreign language. For others it might be a tough decision they have to make. Even for some it might by some sickness or mental health issue they have to face. Lastly it might by a specific person in their life that they might be struggling with. So we all have our water. Now when Peter first leaped out of the boat, he walked on the water. But he started to notice the stormy seas. He lost his focus on the Savior and began to sink. Christ tells Peter, “O thou of little faith, wherefore didst thou doubt?” Through Christ, I know that we can be raised up out of whatever “water” we are in. All we have to do is put our trust in the Lord and keep going.

I love you all!! Thank you for taking the time to check up on me and so how I’m doing! Your kind emails, letters, and packages make my day!! Hopefully something in what I shared today either stuck out to you or was helpful, because I really felt like these were the experiences I needed to share.

Funny thing that happened this week at the MTC:

2. We celebrated Elder Keys birthday at 9:30 one night, right before quiet hours, with party hats, the noise making blowy thingies that shoot out like a snake tongue and sound like an elephant, and cakes from his family. It was really funny because we sang him happy birthday in 5 different languages and like 4 different English versions haha.

3. We spent one night as roommates telling funny stories about high school and college in random accents while laughing so hard that I couldn’t breathe hahah (that night we laughed for a solid 3 hours straight…I think we all have lost it just a little bit).

4. During MTC choir practice, the conductor got on a a construction machine lifty tool that like raises people up to fix power lines. hahaha but he got on that to direct choir practice, we all had a good laugh.

5. My companion skinned her leg (literally skinned it) while shaving, so I got to put my EMT skills to the test.

6. After our Tuesday devotional, people were being really slow at walking down the stairs. So an elder says to his companion, “uhhh I just wanna shove everyone down the stairs, but I can’t shove the sisters”. So my roommate says, “You can shove the other side, it’s just elders.” So the elder in front of him goes, “elder you can’t shove me.” And the original elder goes, “elder, I will shove you all the way to the Celestial Kingdom haha“. So my roommate goes, “ummm in that case, you can go ahead and shove me to the Celestial Kingdom.” Then he goes, “I can’t sister, that’s inappropriate contact, but I can kindly invite you haha” OH MY, IT WAS SO FUNNY!!!!!

I love you all so so so much!!
An Jie Mei